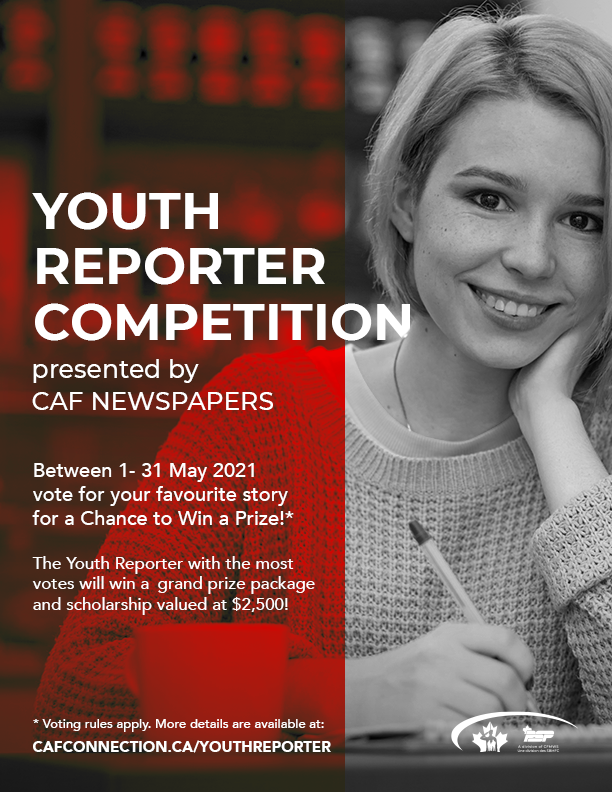 Support the next generation of writers. Vote for your favourite youth reporter story between now and May 31st and you can set one young person up with a grand prize package, including a $2,500 scholarship.

Every fall, Canadian Armed Forces (CAF) Newspapers* invites young people, 13 to 18-years-old, from military families and Cadets, to enter our Youth Reporter Competition. This year’s competition is sponsored by Adobe.

Aspiring reporters are asked to submit a story idea about something important in their life or community. CAF Newspapers received more than 50 applications from CAF-affiliated youth across Canada and the world.

In late January, a selection committee of CAF Newspaper editors reviewed applications to select six story ideas with the most editorial merit. Originality and social impact are key considerations.

One month later, six finalists were contacted and given a deadline to develop their story idea into an original article. All stories are featured in a special PLAY e-zine edition, published on CAFconnection.ca and in CAF newspapers across Canada.

Your vote takes them to the next level.

“The youth reporter competition gives young people affiliated with the CAF a chance to have their voices heard and to develop their writing acumen,” says Ryan Cane, Editor in Chief and National Recreation Manager for PSP. “As a community, we learn a lot by listening to stories that are meaningful to the next generation, and it’s great that CAF Newspapers offers this opportunity annually.”

Now it’s your turn to connect with these young writers. Read the top six stories and vote for your favourite for a chance to win a participation prize. Voting is open until May 31, 2021 (closing at midnight EDT), at CAFconnection.ca/YouthReporter.