The Stadacona Band of the Royal Canadian Navy is welcoming spring in a joint chamber music concert with the Maritime Conservatory of Performing Arts.

This is the third time the Stadacona Band has held a joint concert with the Maritime Conservatory. 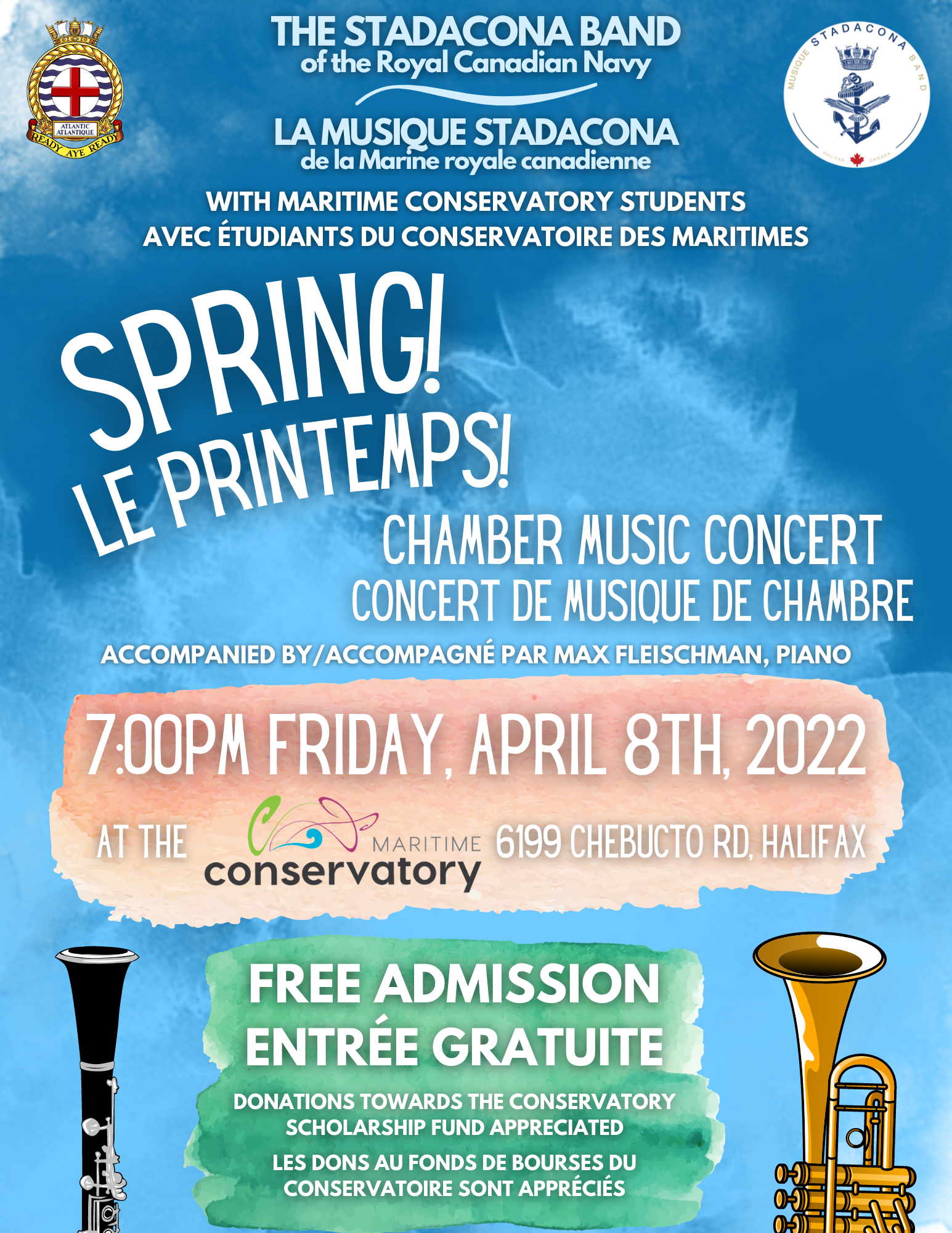 Unlike most concerts performed by the Stadacona Band — such as seasonal concerts, or performances that honour specific events in the military calendar, like Remembrance Day or the Battle of the Atlantic — this performance is not military in theme but still very much in tune with the military tradition of furthering musical education, said S1 Ilana Domb, the concert organizer.

“We want to support musicians in their learning and experience of music,” said S1 Domb. “It’s inspiring for students to have the opportunity to play with the Stadacona Band. I know in my student years it was just so amazing to be able to play next to my teachers or other professional musicians.”

With several solo and chamber music pieces, the performance is a highly anticipated event for musicians in the Stadacona Band as well, she said.

“It highlights our band members in a different way than they are featured in their daily work. It’s a special opportunity for us to do this.”

The musical program will be about an hour and a half long, and will feature solo performances and chamber ensembles.

The program will open with Lt Jeff Campbell, a newly commissioned music officer who has been training with the Stadacona Band, conducting Serenade in E Flat, by Richard Strauss. Lt Campbell is also leading a performance of Stravinsky’s Octet for Wind Instruments.

Other selections from the program include a brass ensemble playing London Miniatures, by Gordon Langford, a clarinet quartet playing both Tango from Espana, by Isaac Albeniz and Georges Bizet’s Aragonaise, as well as a horn duo playing I Got Rhythm, by Ira Gershwin, and the full band and students playing Michael Sweeney’s Crossings in Time.

As an added highlight of the concert, twin brothers  — “the Brothers Danilov” — will be reunited to play in various selections. Both brothers play clarinets, PO2 Edward Danilov with the Stadacona Band, while Sgt Victor Danilov plays with the Royal Canadian Air Force Band, based at 17 Wing in Winnipeg.

The Maritime Conservatory of Music is located at 6199 Chebucto Rd. Admission is free or by donation, with contributions going to the Conservatory Scholarship Fund.