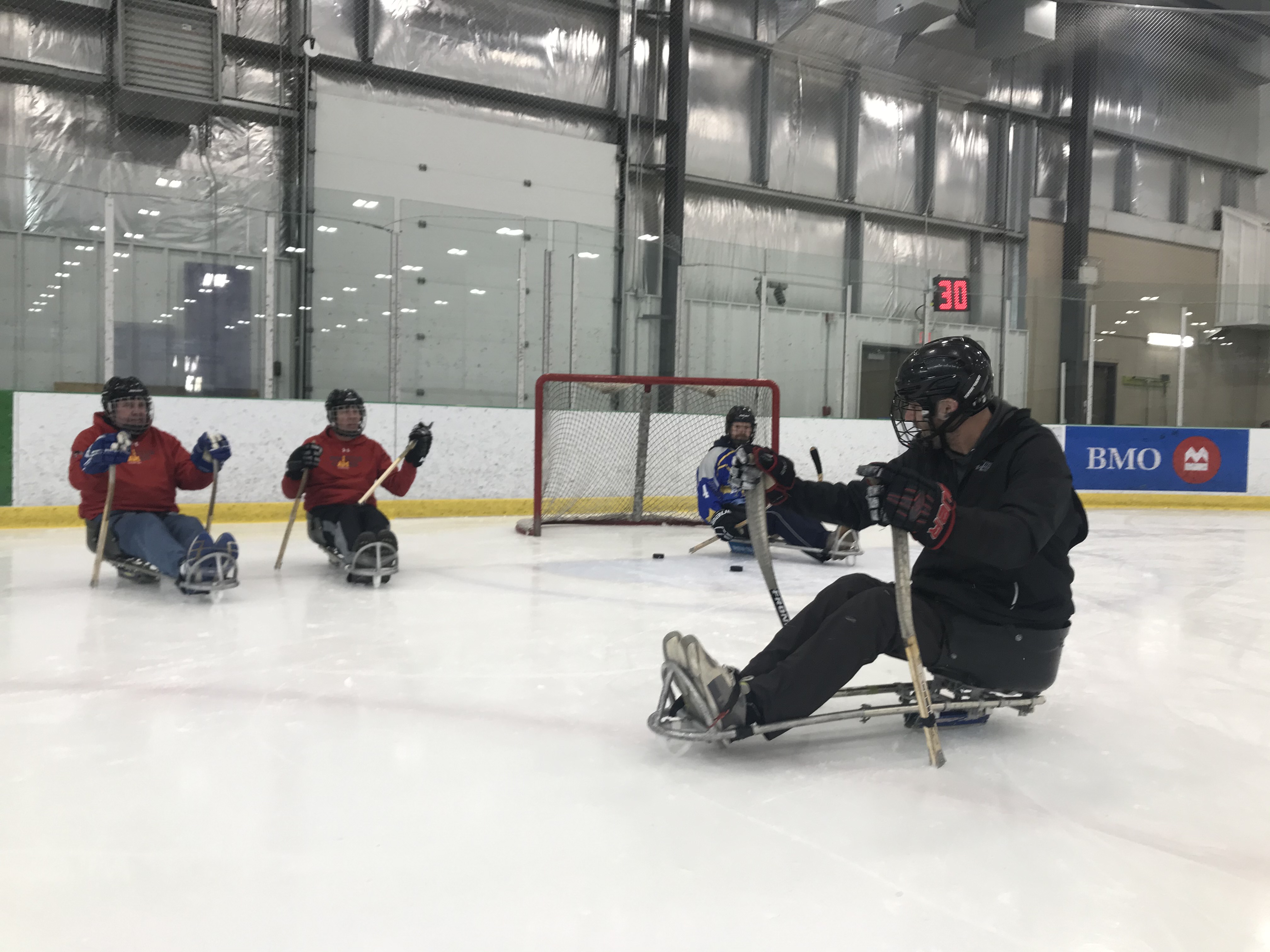 Ahead of the game: Soldier On hosts sledge hockey camp

Before strapping himself into a sled and pushing out on the ice to learn the basics of para hockey, Junior Gosse had only ever seen the sport played on television.

“I used to play hockey — stand up hockey — when I was younger, but I’m not able to play anymore, so it was great to get out. I liked it a lot,” Gosse said.

Gosse was one of five participants who took part in a learn-to-play-sledge hockey event at Bedford’s BMO Centre on March 7, sponsored by Soldier On with coaching and guidance provided by Paul Tingley of the Halifax Sledge Grinders and Parasport NS.

Guided by Tingley, a para-athlete himself, each participant chose a sled to match their size and comfort level, before heading out to the gate. There they strapped in, put on helmets and other protective gear, got hockey sticks and pushed out onto the ice.

Lesson one: how to get around.

Using two short hockey sticks with metal picks at the bottom, the Soldier On participants learned how to push, turn, and stop. Once everyone got going, it became quickly apparent that the closer those two skate blades on the bottom of the sled are, the easier it is to tip over.

Cue lesson two: how to get back up. Not as easy as it looks.

During the one-hour session, Tingley guided the group through the basics of para hockey, leading them through puck handling and passing drills, before finishing off with a scrimmage game, with Tingley as goalie.

While everyone got a chance to shoot and score a goal, the bigger goal with Soldier On events, explained Eileen Du Plooy, regional coordinator of Soldier On for Nova Scotia and Newfoundland and Labrador, is to bring together both serving and retired Canadian Armed Forces members to connect with each other in a fun and active way.

The hope is participants learn new skills “as part of their recovery” in overcoming the challenges of their injuries, Du Plooy said.

It’s a program that has worked for Gosse, as he credits getting involved with Soldier On in 2018 as a turning point in his life.

After retiring from the military in 1999, Gosse went on to work at the Halifax airport until his retirement last year, but injuries from his years in military service had left him feeling “pretty banged up,” he said.

“I had PTSD and shoulder, back and hip injuries and other physical limitations. I was close to using a cane to get around and had a hard time even getting out of bed most days,” Gosse said. “It was dragging me down in a big way.”

After joining Soldier On, Gosse learned about opportunities to train and potentially take part in the Invictus Games, planned for May 2020 in The Hague, The Netherlands. Motivated by that goal, he began going to physiotherapy and doing exercises to rebuild his core strength, as well as starting a training program to get back into shape.

In 2019, Gosse was selected as one of 32 people to be part of Team Canada for the 2020 Invictus Games, competing in three sports: swimming, cycling and wheelchair basketball.

“They were three sports I had to pretty much pick up from zero,” Gosse laughed.

Although the Games have since been postponed to spring 2022, Gosse is still training.

“It’s not easy,” he said. “There are plenty of days when I did not want to do it but I managed to force myself to get up and go. Physical exercise, regardless of how out of shape you are, if you’re out there doing something it’s going to help you physically and mentally.”