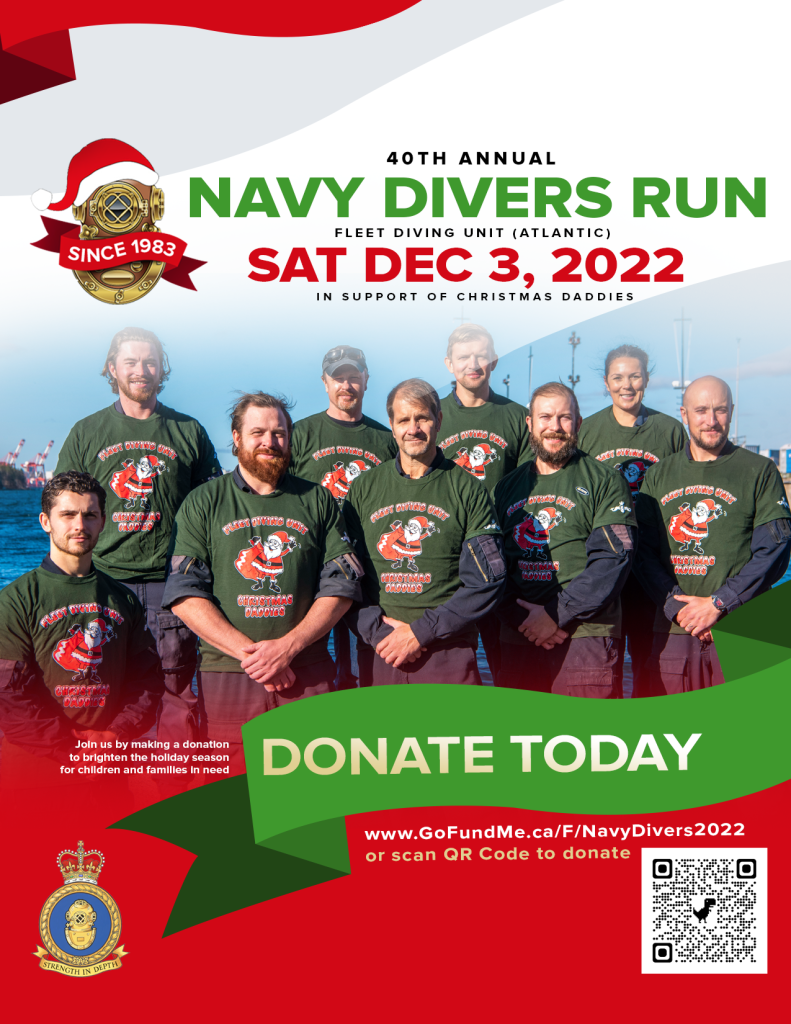 After two years of COVID-19 restrictions limiting in-person events, this year’s fundraiser will include a run at the FDU(A) unit, along with some new innovations added over the past couple of years to keep the tradition going — things like location “hot spots” where the Navy divers can do pandemic-safe activities while collecting donations, and their GoFundMe page that has been a huge success.

“If there’s a silver lining to a pandemic, it’s that it forced us to be more creative and that’s a good thing as now we can raise even more money for Christmas Daddies,” said Sailor First Class Brad Northrup, a member of FDU(A) and one of the event organizers.

That 2022 marks the divers’ 40th anniversary doing the run, is the icing on the cake for this year’s event, he added.

“We’re super excited about this, that we’re able to do the actual run again, that we’ve got these hot spots and the GoFundMe page, and that it’s our 40th year doing this. It’s a huge year for us and we couldn’t be happier to be doing it,” said S1 Northrup.

The fleet divers began the annual event in 1983 and have since raised nearly $350,000 in donations from the run itself. In 1985, they added another element — an MK5 Navy Divers helmet — to the auction portion of the run. It’s one of the most coveted annual auction items for Christmas Daddies, and has helped put the divers’ total contribution up over a million dollars since 1983.

With the online GoFundMe page and hot spots raising over $13,000 each of the past two years, FDU(A) is excited to see how much they can raise from this year’s run, which will end at the CTV studio in Halifax during the Christmas Daddies Telethon.

A holiday tradition since 1964, the Christmas Daddies Telethon raises money to buy gifts for children and food for families, helping thousands of Maritime children and families each year.

The televised event airs on CTV Atlantic, along with a livestream of the event on the station’s website, on Saturday, December 3 from 11 a.m. to 6 p.m.The divers have announced two hot spots during the day — Alderney Landing Market and at the Halifax Waterfront near Murphy’s on the Water — from 10 a.m. to 3 p.m. For updates on the divers progress, check their Facebook page at https://www.facebook.com/FleetDivingUnitAtlantic, and to contribute or find more information about fundraising, visit the GoFundMe page at gofundme.com/f/NavyDivers2022.