By LGen W.D Eyre,
Acting Chief of the Defence Staff

To the members of the Canadian Armed Forces: 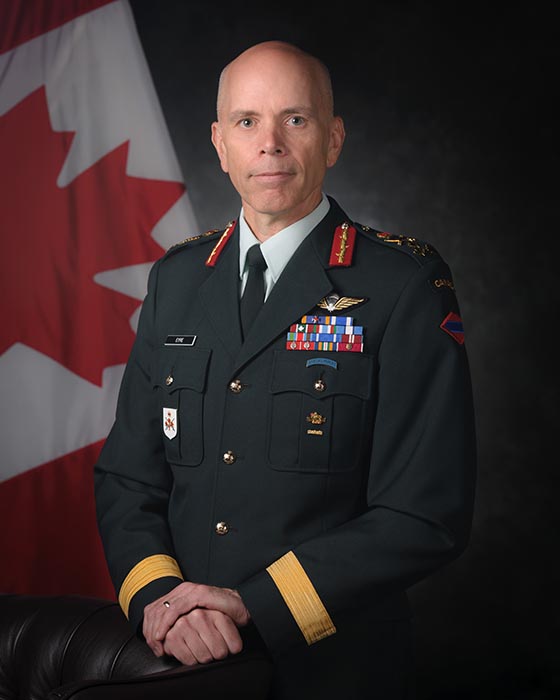 Having just passed the one year milestone of being in a pandemic, we continue to live in a dynamic and unpredictable environment and recent events have added to the uncertainties we face. As your Acting Chief of the Defence Staff, I view my primary role as continuing to provide our nation a force that delivers operational excellence in a manner that is reflective of Canadian identity and values and which Canadians remain proud of. Early in my tenure I believe it important to orient you on my four overarching focus areas of people, operations, readiness, and future capability development in order to guide our collective efforts.

PEOPLE Culture. The Canadian Armed Forces is at an inflection point with regards to our culture. Recent sexual misconduct revelations and allegations are very disturbing, have shaken us, and made clear how much farther we need to go to be the CAF that our people deserve, and Canadians expect. Furthermore, the societal problems of racism and hateful conduct continue to manifest themselves in our ranks. We need to view the current crisis as an opportunity and come out of it as a better organization. We will re-establish trust where it has been broken. We need all of our members to work in an environment characterized by a sense of mutual respect, dignity, safety and truly belonging. To that end, early work indicates we need to follow two streams:

In all of these efforts, we will support victims as they come forward, while at the same time respecting the fundamental right of due process for ongoing investigations.

Health and Wellness. Like the rest of society, life in the pandemic has been hard on our members and their families. We must continue to support one another, seek and offer help when the need exists, and make maximum use of the coping tools and resources available. As the conditions of the pandemic ease, we must take full opportunity of reinforcing our social connectivity.

Postings. We will soon enter the Active Posting Season, and the high stress usually associated with it is exacerbated again this year with the pandemic. Housing prices across the country add to the burden of stress, as will navigating different Provincial, Territorial, and international pandemic-related travel restrictions. Once again, we will take a very flexible approach with move and report for duty dates. Guidance will be promulgated via CANFORGEN in the coming days.

Personnel Initiatives. We will continue with the vital work Military Personnel Command is undertaking to improve the conditions of service for our members and their families. The work on a revised Universality of Service (U of S) policy is progressing well along with specific Adaptive Career Path (ACP) initiatives that will offer more options to CAF members and their families. A long overdue Retention Strategy is under development to focus on retaining the excellent talent that lives and leads across the CAF. These initiatives must be delivered while respecting the guiding principles of our Canadian military ethos, most notably service before self and through a Gender-based Analysis Plus (GBA+) lens. To that end, the CAF personnel management system needs to be modernized and, in some areas, changed. To achieve this, we will continue with the development and implementation of a new CAF HR Strategy.

Domestic. The perfect storm is potentially upon us, with the confluence of Operations LASER and VECTOR, as the response to the pandemic must continue, and LENTUS as spring comes with the usual heightened risks of natural disasters such as flooding and forest fires. We continue to provide excellent support to Canadians across the country: in Indigenous and Northern communities as they deal with outbreaks; in leading national planning efforts for vaccine distribution; in support to land border crossings; and very soon in the vaccination efforts for many Northern remote and Indigenous communities. Every day our forces are prepared to assist national authorities when requested, our Search and Rescue enterprise stands ready to respond to those in need, as does NORAD to defend Canada and the United States. Throughout this period, the bulk of our operational effort and focus will be on the home game.

CAF Vaccination. Vaccinating the CAF is an operational focus. Over the course of the next three months, we are planning to receive 150,000 doses of vaccine, for which the administration will be the primary focus of our Health Services. I have issued vaccination priorities and more detail is in FRAGO 001 to CDS TASKORD 002 – Operation VECTOR – CAF COVID-19 Immunization Campaign. I strongly encourage all to get vaccinated. Our operational effectiveness depends on it. As our Force is vaccinated we will modify our protective measures according to best practices and regional health measures.

Expeditionary. Throughout this period, we will continue to do our part to ensure international peace and security, with ongoing operations such as Operation CARIBBE in Latin America and the Caribbean, Operation PRESENCE supporting the United Nations in Africa, and with upcoming rotations in Operations UNIFIER and REASSURANCE Land Task Force and Air Task Force-Romania. We will continue to be a leader abroad, notably with our ongoing commands of the Standing NATO Maritime Group One in Europe, and the Combined Task Force 150 in the Middle-East. We will continue to excel and maintain our efforts in the Indo-Asia Pacific region, including the ongoing deployment of HMCS Calgary, the upcoming deployment of HMCS Winnipeg, and our CANSOFCOM efforts across the globe.

Personnel Generation. In a time when we should be growing our numbers, the pandemic has led the CAF to shrink in size in both our Regular and Reserve Force components. While our attrition over the last year has decreased by approximately 25%, our intake has only been a third of normal. As our recruiting system and CFLRS return to full capacity, we will need to continue to conduct decentralized Basic Military Qualification courses, and prioritize courses necessary to maximize the number of personnel reaching Operational Functional Point. A key aspect throughout will be increasing the diversity in our ranks to benefit from the talent inherent across Canada.

Individual Training. Likewise, our individual training course throughout has been significantly affected. In the mid-term, we will prioritize individual training over collective training in order to develop the leadership and technical qualifications and skills we need.

Collective Training. Collective training must continue, albeit in most cases at a reduced scale, to maintain our proficiency in higher level activities. NORAD’s Ex AMALGAM DART, the Army’s Ex MAPLE RESOLVE and the Navy’s Ex DYNAMIC MONARCH to name just a few exercises, will continue to be conducted in a modified manner, using risk mitigation strategies to protect health and safety. To gain capacity for other activities, we will forgo such activities as the Ceremonial Guard, the CAF Small Arms Competition, and most community engagements.

Allies and Partners. Our competitive advantage in today’s security environment is being part of a network of like minded allies and partners. As conditions permit, we look to restore and re-engage with partners in various events, including exercises, training, and engagements.

SSE Investments. Our defence policy, Strong, Secure, Engaged, lays out an impressive capital investment plan that we must continue to aggressively staff. Canadian Surface Combatant, Future Fighter, and many other programmes will be the foundation of our future military. We are already seeing increased capabilities with such projects as the Arctic and Offshore Patrol Ship and the LAV 6 family of vehicles, including the first of the Armoured Combat Support Vehicles just rolling off the production line. These projects will continue to demand significant and necessary effort.

Integrating Capabilities. Fueled in part by rapid technological development, the increasingly integrated character of warfare and international competition across all domains, including in non-traditional ones such as cyberspace are demanding that we invest in the foundation of our military enterprise. To this end, we will continue our pursuit of four very high priority capability areas: digitizing the force and adopting digital practices; a common C4I (Command, Control, Communications, Computers, and Intelligence) ‘spine’; the joint sustainment enterprise; and leader professional development.

Defence of Canada. Various trends such as climate change, increased interest in the Arctic, and challenges to our national resilience, made clear during the pandemic, are driving change in how we conceptualize national defence. Recent announcements by the Government, such as the Canada-US national leader discussions, indicated the imperative of improving our continental defence, including the modernization of NORAD. In the short-term, we will continue to provide military support to policy development, including capability conceptualization and force design.

Despite the challenges we face, the business of defending Canada and Canadian interests must continue. Potential adversaries are not resting, and continue to expand their reach and test our resolve. At the same time, the scale and scope of tasks we are being called upon to perform are expanding as we protect our population.

The CAF post-pandemic will not be the same CAF as pre-pandemic… too much has changed. Balancing our capacity across many activities will be crucial as we evolve. In all, we are committed to making the CAF better in all we do, most importantly for our people who underpin every single aspect of our service. In every day that I serve, guided by these focus areas, I will endeavour to make the CAF a better place. I ask you to do likewise.