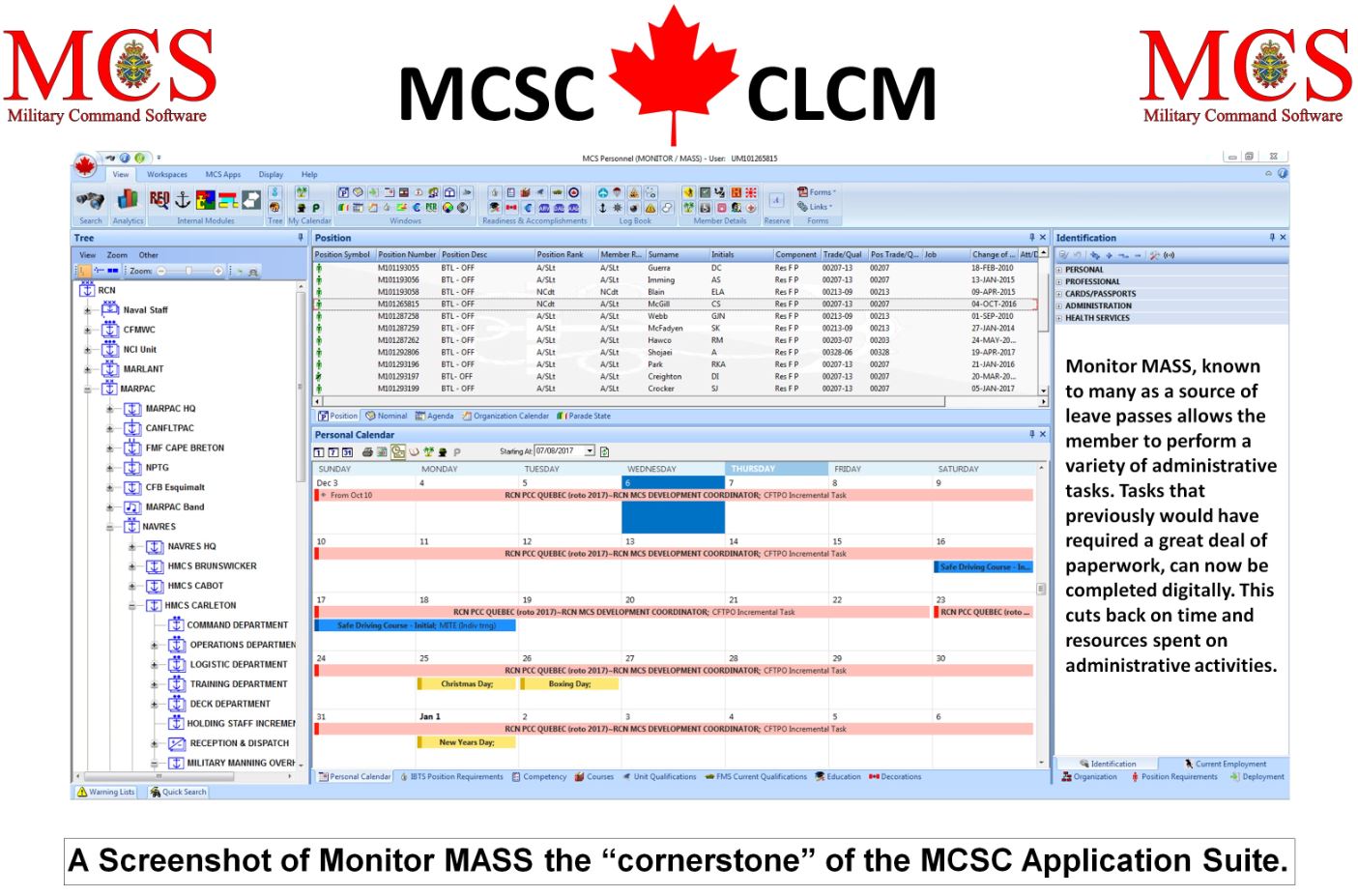 CAF members can now benefit from a software application suite developed in house, on time, and within budget. The Military Command Software Centre (MCSC), originally stood up by the Army to meet rapidly evolving needs, has built an eighteen-year record of deploying responsive, military-specific and cost-effective software applications for CAF-wide use.

The Military Command Software Centre is helping to reduce administrative burdens with the Monitor MASS system. With over 50,000 users across the CAF, Monitor MASS is the best-known MCSC application, and is familiar to many as a source of leave forms.  The software has evolved into a general purpose Military Administrative Support System (MASS), simplifying several unit-level administrative tasks, and replacing thousands of spreadsheets and local databases.

The RCN has contributed a great deal of resources to MCS projects. Through the work of Director of Naval Strategic Management: Governance (DNSM 6) and the RCN MCS Development Team, the RCN has initiated the process of integrating MCS applications into their management structure.

CF Tasks, Planning and Operations (CFTPO) is another major MCSC application. It is used for Operational and Cross-Command tasking, and is also widely employed within the Army, RCN, RCAF and CF Health Services. CFTPO has over 7,000 users and manages over 200,000 tasks per year.  Both CFTPO and Monitor MASS communicate in real-time, and are inherently aware of the chain of command, providing data and functionality as appropriate to the user’s rank and position.

In 2015, the MCSC deployed the CF Recruit Information Management System version 2 (CFRIMS-2), replacing an obsolete system based on the commercial PeopleSoft software. The CAF must recruit in accordance with the National Defence Act, and software to meet that unique set of requirements could not be bought commercially.  Deploying agile development methods, an MCSC team was able to build a system meeting unique military requirements for approximately five percent of the eight figure cost projected for a non-compliant commercial system.

The widespread adoption of MCSC applications across the CAF is a consequence of responsiveness to military needs, above all to the need for change.  Mark Proudman, a software designer with the MCSC, says “For us, agile isn’t just a slogan: agile methods anticipate and plan for changing requirements. Any information system that does not plan to change is tying leadership’s hands.”

The RCN is already benefitting from the work at the MCSC with all major RCN warships now deploying the disconnected Monitor MASS Nomad version. Nomad allows for data and code synchronization to occur when Defence Wide Area Network (DWAN) is available alongside. This capability eliminates the need for a huge amount of documentation, and saves space on the ship further benefitting the crew.

The Professional Development Training Management System (PDTMS), a project spearheaded by CPO1 Steve Gracey and CPO2 Robin Coté at DNSM6, will enable highly enhanced training management capabilities. The main advantages PDTMS bring to the table is greater transparency and organizational capability regarding training, scheduling, and qualifications. This allows for the greater coordination of resources such as instructors, classrooms and equipment needed for the course. It allows priorities to be set to ensure a set amount of spaces for certain elements, reservists, or even individuals with an urgent need to complete a course. The national training calendar within PDTMS will be available in Monitor MASS and accessible for viewing by all members.

An important application within PDTMS is the Ability, Achievement, Authorization Module (A3M). A3M is currently being developed by the RCN MCS development team, led by Ted Rush. A3M tracks and displays all competencies (National Qualifications (NQuals)) ensuring their validity and equivalency, even if the course completed is changed. The A3M assists in the recognition of a member’s Prior Learning Assessment and Recognition (PLAR), and simplifies recognition of equivalent military/civilian skills in a new military trade. This prevents unnecessary training repetition based on the recognition of qualifications obtained in a previous military or civilian trade.

The Multi-Module tracking employed in the module allows members to enter courses midway ensuring the maximum amount of members have the appropriate training offered to them. This enables administrators to take a previously qualified civilian or member who has already completed certain modules, and put them into a course midway. The time, resources and training saved by this recognition will greatly benefit the CAF’s intake, and retention of new skilled recruits.

The MCSC has a full docket of incoming requirements to meet the needs of an expanding military user community. The power of MCSC applications is available to all DWAN users under the Control Panel Get Programs or Run Advertised Programs selections, grouped together under the prefix MCS.